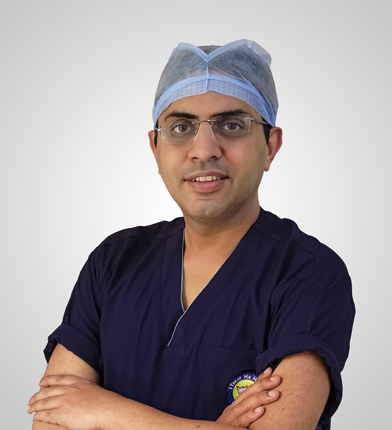 Dr. Akshay Kumar completed his MBBS from the reputed T.N. medical college, Mumbai in 2005 and then went on to pursue his MS in General surgery from KEM Hospital, Mumbai in 2008. Later he completed his training in Cardiovascular and thoracic surgery in LTMG Hospital which is one of the busiest centers in Mumbai. He has further received advanced training from the best university in United States. He completed his fellowship training in pediatrics cardiac surgery, ECMO, Mechanical circulatory support and heart & Lung Transplant from some of the best universities in United States. Over the last 15 years he has performed more than 10,000 surgical procedures which include patients with severe organ dysfunction and high risk cardiac surgeries.

He is specialized in coronary artery bypass grafting, aortic valve and surgery of the aorta for aortic dissection and aneurysms, mitral valve repairs, robotic and minimal invasive thoracic surgeries. He has also performed vascular surgeries like aortobifemoral bypass, axilloibifemoral bypass, endovascular etc. He has special interest in end stage heart & lung disease treatment and sepsis related cardiac dysfunction. He is associated with many prestigious organizations including Society of thoracic surgeons, American medical association, Indian association of cardiovascular surgeons, American society of artificial internal organs. Besides this, he is actively involved in many research, academic, teaching, leadership roles in both national and international fraternity.